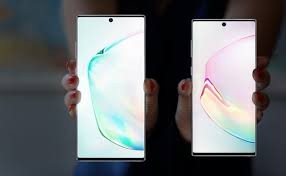 The Good The Galaxy Note 10 Plus delivers the premium goods, from a killer 6.8-inch screen and all-day battery life to excellent camera tools.

The Bad The Note 10 Plus is expensive. There's no headphone jack, which will disappoint long-time Samsung fans. The depth-sensing camera is extremely limited.

The Bottom Line Samsung closed the camera gap with rivals and created a top-of-the-line phone for people who want the best Android has to offer.

amsung makes excellent phones that check nearly every box of what you'd want in a device: a clear, brilliant screen. Great cameras. Strong battery life. But it's been years since all the individual parts have come together in a way that makes me sit back and say, "Wow." The Galaxy Note 10 Plus does that in a way that's eluded Samsung phones since the tragic Galaxy Note 7.

This isn't just a phone that has it all -- it's a phone I genuinely want to use. The Note 10 Plus is the total package and the best phone Samsung's made in years.

The prismatic Aura Glow color I tested is utterly striking to look at, the features are nearly all best-of-breed and Samsung has even worked to close the gap between its camera tools and camera-centric rivals like the Huawei P30 Pro and Google Pixel 3. The Note 10 Plus also fixes my two major complaints about spring's Galaxy S10 Plus (which is still a great phone): the in-screen fingerprint reader is dramatically more accurate this time around, and the camera's dedicated night mode improves photo quality in low light.

Keep in mind that the Note 10 Plus isn't a mainstream phone. It still targets power users who want a big device and will actually use the included S Pen stylus. It's overkill for people who want a smaller phone or are completely uninterested in the stylus.

Samsung also introduced a smaller version of the Note 10, which has a 6.3-inch screen and costs $150 less than the Plus, coming in at $949. Samsung also pulls back on the specs (e.g., less RAM, no microSD card storage), but it can still do 90% of what the Plus model can do. I'll start reviewing that one soon. Scroll to the end for a full specs comparison.

If you're on the fence, remember that the iPhone 11 (likely due in September), Google Pixel 4 and Huawei Mate 30 Pro (likely coming in October) are around the corner. But for the first time in a long time, I can say to power users: Why wait? The Note 10 Plus is outstanding, and worth buying.

What's in this review: Read on for the best and worst of the Note 10 Plus, then stick around to learn about how good the new camera features are, life without the headphone jack, gesture controls, all-day battery life and how it compares to other rival phones.

The Note 10 Plus has the same main cameras as the Galaxy S10 Plus (it adds that depth-sensing lens), but Samsung's put a lot of effort into improving the phone's software, and that goes a long way to making the phone easier to use for taking photos.

Daytime photography is excellent, but the dedicated night mode is where Samsung really steps it up. This mode, found in the camera app, takes a few seconds to process a photo, really drawing out colors and details from a dark scene. I wish Samsung would add a count-down clock, so you know how long to hold the phone still, but photos taken in this mode can make a big difference.

Samsung's color processing can overbrighten in some night-mode scenarios, where auto mode actually produces a more pleasing, higher-contrast image -- so don't plan to use it every time.

The Note 10 Plus also does interesting things with video. Live Focus video mode adds a depth effect to video, and you can choose among four filters for both your front and rear cameras. Jawlines and extremities can blur, and some of my curly hair smeared into the background, but the focus on the face is reasonably good.

Another new feature turns up the volume on the source of music when you zoom in. I tested this out on four different musical acts and... John Travolta doing the twist. Called zoom-in-audio, it works as advertised, but some scenarios are more effective than others. It's hard to reposition the focus as you zoom and image quality suffers when you zoom in too closely.

Applause all around for the baked-in video editor that lets you add musical tracks, trim and add text. It's great to be able to quickly produce a simple video on-device and share it out immediately.

AR Doodle is a feature that got a lot of press when it first came out, because it's unique and highlights the power of the S Pen. You hop into video mode and can record a short video of yourself, someone else, or a scene in the world around you (it appears to time out after a minute). For example, I had fun embracing my punk side (see the video if you're curious), and skywriting over the San Francisco skyline.

Fun and silly as AR Doodle is, it still needs work and doesn't have a clear sense of purpose. Some pen tips are hard to write with, strokes disappeared over time, and there's no clear way to take a still photo of your finished work of art. Side note: AR Doodle doesn't use the depth-sensing camera.